One day soon, if someone is willing to do the work, whales could be analyzed in a manner similar to what’s been done with roller derby skaters.

E! Science News reports about preliminary work that’s been done Amy Apprill and colleagues performed with bacterial from the skin of humpback whales: 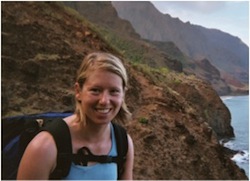 Bacteria are invisible to the naked eye, but they reside on nearly every surface humans encounter — including the skin. Uncovering the role these microorganisms play in human health is a major focus of research in skin microbiology, but little is known about the identity or function of skin bacteria in other mammals. In a paper published in the open access journal PLOS ONE, researchers at Woods Hole Oceanographic Institution (WHOI) and colleagues identified a core skin bacterial community that humpback whales share across populations, which could point to a way to assess the overall health of these endangered marine mammals. “The skin is the interface between the animal and the ocean it lives in,” said lead author Amy Apprill, a microbiologist at WHOI. “By studying the bacterial species on the skin of humpbacks, we might be able to learn more about their health and the status of their environment.” …

At the recent AAAS annual meeting, in Chicago, the Improbable Research session featured Prof. Kate Clancy explaining — and demonstrating, with help from the Twin City Derby Girls and the Chicago Outfit — the significance of the study “Signiﬁcant changes in the skin microbiome mediated by the sport of roller derby“.