Along with its usual fare — ethnography and anthropology about the peoples of the Western Hemisphere — Paris’s Journal de la Société des Américanistes devoted part of its 1909 issue(*) to a sort of review article summarizing all known extremely tall people of the Americas. 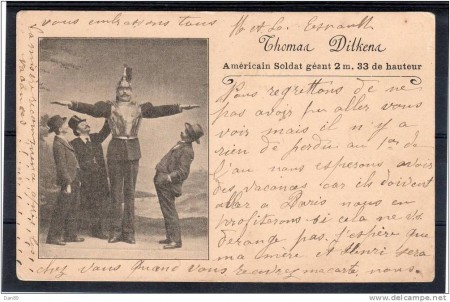 These were mostly modern cases of acromegaly who died before age 30, such as Edouard Beaupré, the Métis marvel from Manitoba; Ella Ewing of northern Missouri; James McIndoo, the Minnesota watch repair expert; Thomas Dilkens, a 7’4″ US soldier who was still alive as of 1909; and Santos Mamai, a Bolivian or possibly Peruvian whose death was mentioned in the New York Times.

Professor Blanchard goes into greater detail on two other Peruvians, Pierre (Pedro) Cano and Basile (Basilio) Huaylas, who may be the earliest American giants conclusively documented, thanks to the late-18th-century accounts of Franciscan missionaries Narciso Girbal y Barceló and Manuel de Sobreviela. But no words can capture the Lewis Carroll-esque wonder of this engraving of Basilio Huaylas and friend, adapted from a full-color illustration in the 1805 English translation of the friars’ narrative.