Alexander Lukashenko, the president of Belarus, who just a few months ago was awarded the Ig Nobel Peace prize, is very popular, reports the Belarusian Telegraph Agency on March 6, 2014:

MINSK, 6 March (BelTA) – The recent poll conducted by the Information and Analysis Center (IAC) of the Belarus President Administration has revealed that the approval rating of the Belarusian President stands at 79%, BelTA has learnt. 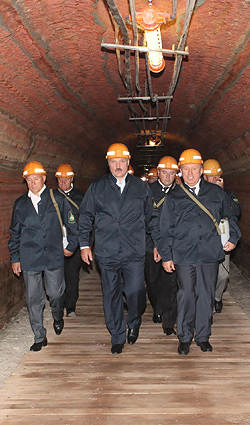 The approval rating of the government and the parliament is about 40%, that of opposition parties is 3%.

The results of the poll suggest that the majority of Belarusians (74%) are quite happy with their life. Some 71.5% of those polled said they are confident about the future, 18% said they are not.

The issues that cause the biggest concern include an increase in prices for goods and services and the increasing alcohol abuse and drug abuse.

The absolute majority of people (81%) called the social and political situation in the country ‘stable’. Only 2% of the respondents said they might consider taking part in protests.

Despite President Lukashenko‘s popularity, few are applauding him, at least in public. President Lukashenko was awarded the 2013 Ig Nobel Peace Prize for making it illegal to applaud in public; the prize was jointly awarded to the president and to the Belarus State Police, for arresting a one-armed man for applauding. [Yet, one can demonstrate one’s appreciation.]