A triceratops makes a rare appearance in the news, in this March 6, 2014 report by Sidney Bender in the Vineyard Gazette [in Martha’s Vineyard, Massachusetts]: 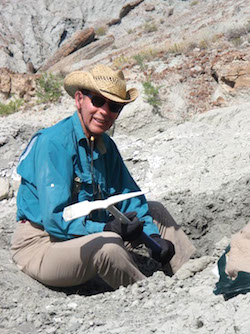 When Oak Bluffs firefighters responded to a fully involved fire on Barnes Road late Wednesday night, they knew that they had more than just a house to save. A quick response by volunteer firemen saved both the summer home owned by Dr. Henry J. Kriegstein [pictured here] and a rare seven-and-a-half foot tall prehistoric dinosaur skull that was inside.

“We had prior knowledge of that fossil being in there so we were able to protect that pretty quickly,” said Oak Bluffs acting fire chief John Rose. Dr. Kriegstein, an eye surgeon with a fossil collecting hobby, said the triceratops skull in his Oak Bluffs home is one of few that exist in the world and is believed to be more than 43 million years old.

The fire call came in around 9 p.m. on Wednesday. Oak Bluffs volunteer firefighters responded within minutes….

(Thanks to investigator Sally Shelton for bringing this to our attention.)