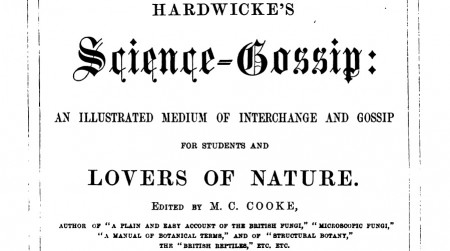 Though it did not seek to publish real scientific studies, on occasion Science-Gossip could be the venue for new discoveries. For example, the March 1866 edition recounts one young investigator’s novel technique for capturing a bird. Like all the best breakthroughs, it occurred unexpectedly, in the process of trying to do something else.

Novel Mode of Capturing a Heron. — Whilst visiting, in the autumn of 1865, at a small Northamptonshire market-town, situated intermediately in the flat district called the Nene Valley, which stretches from Northampton to Peterborough on each side of the river Nene, an incident of rather a ludicrous character, which may interest some of your readers, came under my notice.

A boy, having one night set some eel lines in a shallow part of the river… was surprised and somewhat alarmed on approaching the place next morning, for the purpose of examining his lines, by hearing the water in a state of violent commotion; advancing carefully, and parting the bulrushes with his hands, he peered cautiously through into the river, and discovered to his terror, that the cause of the splashing and dashing was an unlucky heron, who had gobbled up one of the baits, and… now found himself held a prisoner by the line. The boy, still frightened, warily drew up the peg, and dragging the unfortunate and reluctant bird the full length of the line in his rear, marched toward home.

He experienced considerable difficulty when crossing the meadows which lay between the river and the town, in persuading the heron to get over the stiles; but at last they reached the town, and I need scarcely say that in marching up the street the pair created quite a sensation: the boy walking sideways, staring in an excited manner alternately at the people at the doors, from which the sight elicited so much merriment and laughter, and at the heron, who averse to being drawn in such a manner from his favorite haunts… with body drawn back, and legs planted forward in a determined manner, slid, rather than walked, after his captor.

E. Parkins is not clear on whether the young fisherman used this technique to recruit an army of captive birds, which could then be used to catch a multitude of fish, ukai style.