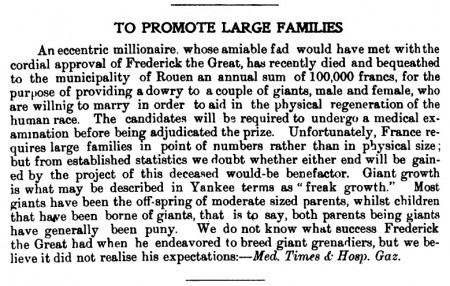 An eccentric millionaire, whose amiable fad would have met with the cordial approval of Frederick the Great, has recently died and bequeathed to the municipality of Rouen an annual sum of 100,000 francs, for the purpose of providing a dowry to a couple of giants, male and female, who are willing to marry in order to aid in the physical regeneration of the human race.

This eccentric millionaire was the Comte de Saint-Ouen de Pierrecourt, who died in May 1901 at age 83, leaving no direct descendants. He had edited his will 18 months earlier, to endow his hometown with the ability to enrich one lucky giant and giantess every year, on the occasion that they get married and promise to procreate for the benefit of France. Presumably this would be done under the auspices of some sort of institute that could determine which towering duo would be most worthy of the bounty, and otherwise use the bequest to improve French genetic science.

However, this provision of the will was evidently never carried out, becoming a casualty of legal wrangling between relatives of the C. de S.-O. de P.; a certain “friend of the deceased”, Mademoiselle Suzanne Bichsel; and the confused leadership of Rouen itself, who ideally would have liked to receive some money but had no desire to get involved in this giant business.

In a 1907 article about silly wills, the San Francisco Call suggests that the Comte de Saint-Ouen de Pierrecourt was just a couple years ahead of his time. One of H. G. Wells’s pioneering science-fiction novels, 1904’s The Food of the Gods, depicts a world where a substance called “Boomfood” lets animals (and people) easily achieve great size.

Indeed one trembles to consider what the position of France among the powers might grow to be in the event of M. de Sainte-Ouen’s dream coming true. The children fed  upon the “food of the gods,” written of by Mr. H. G. Wells, would be mere fantastic episodes in comparison to this steady and relentless onslaught of racial superiority! The time since M. de Sainte-Ouen’s death has been very brief, and the race of marrying and giving in marriage giants is, at present, not a large one, so the world will have at least a short period of peace before the giants of Rouen begin to trouble its tranquillity.