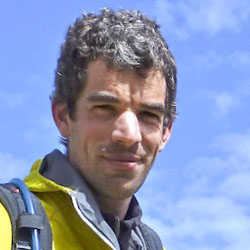 “A relationship between attractiveness and performance in professional cyclists,” Erik Postma [pictured here], Biology Letters, February 2014 vol. 10 no. 2. The author, at the University of Zurich, explains:

“Females often prefer to mate with high quality males, and one aspect of quality is physical performance. Although a preference for physically fitter males is therefore predicted, the relationship between attractiveness and performance has rarely been quantified. Here, I test for such a relationship in humans and ask whether variation in (endurance) performance is associated with variation in facial attractiveness within elite professional cyclists that finished the 2012 Tour de France. I show that riders that performed better were more attractive, and that this preference was strongest in women not using a hormonal contraceptive. Thereby, I show that, within this preselected but relatively homogeneous sample of the male population, facial attractiveness signals endurance performance.”

Bill Andrews gives his take on this, in Discover.

Postma is co-author of the possibly-related  “Genetic constraints underlying human reproductive timing in a pre-modern Swiss village,” A. Bürkli and E. Postma, Evolution,vol. 68, no. 2, pp. 526–537, February 2014.

(Thanks to investigator Steve Nadis for bringing this to our attention. )