There is more to the replica cauliflower ear saga than first met the ear.

My column “Is there a mushrooming market for cauliflower ears?” in The Guardian earlier this week begins:

“In the spirit of making-lemons-into-lemonade, a few individuals have realised that, when life produces cauliflower ears, it might also be coaxed to produce customers who will pay money for replicas of cauliflower ears….” 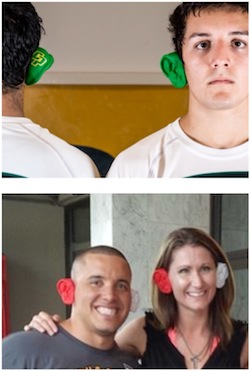 Jag Gill of San Luis Obispo, California, who runs the company that makes and sells the ears, phoned me after the column was published. Mr. Gill has not just a patent application, but an actual patent for his ears (his company web site says, too modestly, “patent pending”). US patent D693967 S1 was granted to Jagvinder Gill on November 19, 2013. The US patent office gives it the priority date March 28, 2011.

The other patent application — #20130326793 A1 — I described in the column was filed by Andrew James Bingley, Walter David McCrindle and Christopher Brian Prickett of Fergus, California. The patent office gives that application a priority date of April 6, 2012 — more than a year later than Mr. Gill’s patent priority date. The Bingley/McCrindle/Prickett application is still under consideration — it has not yet been either granted or rejected. One might, if one could not resist atrocious puns, say the application has not yet been given a final hearing.

Mr. Gill says that many thousands of his replica cauliflower ears are in use, proudly attached to the heads of live, excited persons around the world. His company is called Dedicated Few. Its web site is www.cauliflowerears.com. Mr. Gill supplied the photos you see here. His twitter feed is filled with many more.

BONUS (only distantly related): The 2005 Ig Nobel Prize for medicine was awarded to Gregg A. Miller, for inventing Neuticles — artificial replacement testicles for dogs, which are now available in several sizes, and several degrees of firmness. Mr. Miller holds US Patent #5868140, for a “Surgical method and apparatus for implantation of a testicular prosthetic device”. The photo here shows a Neutical.