“The [Loaded] Leprechaun has been owned and operated as a private company since its founding in 1948 by the O’Shaughnessy family of Boston, MA. One of the great traditions at the Leprechaun is the ‘Dollar Holler.’ Patrons personalize dollar bills by writing a message or drawing a picture with a permanent marker and then staple the dollar to the ceiling, wall, banister, or any other available surface in the restaurant (see Figure 1).” 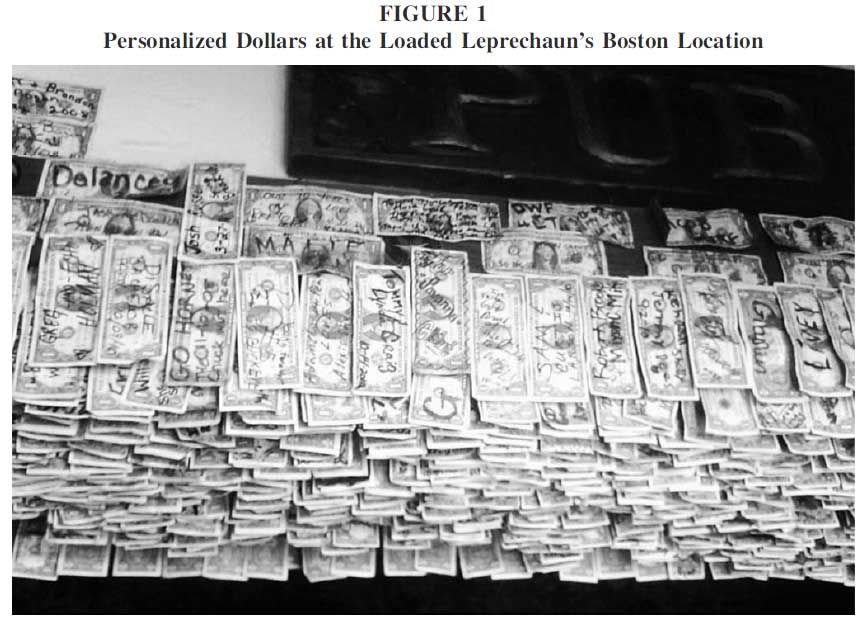 As sometimes happens, activities which seem on the surface to be just a bit o’ fun, can have wider implications. Suppose, just suppose, you were to visit such an Irish-themed restaurant and decided to participate in their ‘Dollar Holler’ scheme – some taxing questions might be raised:

● Would it just be a harmless shenanigan, or might you be committing a crime by ‘defacing’ the notes?

● Would the restaurant have a duty to accurately report receipt of the notes in their accounts? If so, how?

These questions and more are examined in detail in a recent paper for the journal Issues in Accounting Education, (November 2013, Vol. 28, No. 4, pp. 975-978.) authored by no fewer than 4 (four) professors from Auburn University, Auburn, Alabama, US.

‘The Mysterious Case of the Loaded Leprechaun’ by professor Kerry K. Inger, professor James H. Long, professor Tina M. Loraas, and professor Jonathan D. Stanley quantifies the substantial proportions of the phenomenon by pointing out that :

“[…] the O’Shaughnessy family estimates that the average restaurant has accumulated more than $1 million in personalized dollar bills.”

Regarding the questions above, Professor Inger has very kindly clarified some points for Improbable.

“Section 333 of Title 18 of the US Code focuses on defacement with the intent to render a bill ‘unfit to be reissued’, generally applying to altering the bill’s serial number or denomination. According to the Bureau of Engraving and Printing, a bill remains legal tender as long as it is not considered mutilated.

Based on U.S. tax law we concluded that the restaurant would have to pay income tax under the constructive receipt doctrine as well as other primary sources, and this is the approach that McGuire’s takes. Interestingly, an IRS field agent told us that the dollar bills in this situation would be treated as a gift and therefore, would not be subject to income tax. We think this makes a great learning point in class that many times tax research does not yield an unequivocally correct answer. (Can you tell I am a tax professor!)”

Spoiler alert: Those who fancy a spot of shenanigans at the Loaded Leprechaun may have difficulty in locating the restaurant. The paper is presented as a case study to be assigned to accounting students and, like Leprechauns themselves, the restaurant’s existence may not be 100% reality-based.