Here are two cases where: (A)  people used mathematical equations to describe complicated things that nobody understands very well; and then (B) other people noticed the, uh, discrepancy.

The British amateur who debunked the mathematics of happiness: “It seemed incredible to Brown, as though it had been made up. But the number was no invention. Instead it was the product of research that had been published, after peer review, in no less authoritative a journal than American Psychologist – the pre-eminent publication in the world of psychology that is delivered to every member of the American Psychological Association. Co-authored by Barbara Fredrickson and Marcial Losada [pictured here] and entitled Positive Affect and the Complex Dynamics of Human Flourishing, the paper was subsequently cited more than 350 times in other academic journals. And aside from one partially critical paper, no one had seriously questioned its validity….” [Thanks to Jennifer Ouellette for bringing this to our attention. Also see Retraction Watch’s look at this.] 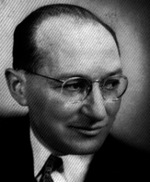 Improbable research: brainstorming calculations: “Human thoughts and emotions are so complicated and hard to define that almost no sane person tries to describe them with mathematics. One attempt, done seriously, came to be regarded almost as a joke. Another, done as a joke, drew all-too-serious admiration. In 1936, Kurt Lewin [pictured here], a German psychologist in the US, produced a book full of it’s-kinda-sorta-like-this descriptions. He titled it Principles of Topological Psychology. There is nothing kinda-sorta-like-this about topology. Imprecise definitions would be worthless to a topologist. Lewin’s book contains little maths, but lots of inscrutable passages….”