Sad news: Russell Johnson, the actor who played the role of The Professor on the TV show Gilligan’s Island, has died. In 1993, Mr. Johnson took a star turn at the 3rd First Annual Ig Nobel Prize Ceremony, back when we were still holding the ceremony at MIT. When I introduced him on stage, the audience—many of whom were MIT and Harvard students, faculty and staff— went utterly wild with joy and tears. Afterwards, many audience members told us that when they were growing up The Professor was the *only* scientist character on TV who was portrayed as a nice guy, rather than as a weirdo or evil creature.

In person, before the ceremony, Mr. Johnson told us he was fearful that people in the audience would think badly of him for pretending (in the TV series) that he was a scientist. We all assured him that, to the contrary, people were thrilled at the chance to be in the same room with him. It was a very happy and moving experience for all of us.

You can see Russell Johnson in this photo, seated at right in the front row, wearing glasses, a tie, and dark jacket, applauding. (The man in the white coat is Harvard professor William Lipscomb, at the moment that an audience member won him as the prize in the first-ever Win-a-Date-With-a-Nobel-Laureate Contest. The man in the Einstein wig is astronomer Alan Lightman, author of the then-recent book Einstein’s Dreams. A bonus fact: We almost—almost!—managed to get Dawn Wells, the actress who played Mary Ann in Gilligan’s Island, to be in that ceremony… but the logistics of her schedule and our ceremony did not fit together quite well enough to make it possible.) 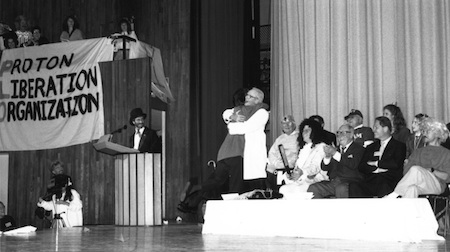 Russell Johnson, the Professor on ‘Gilligan’s Island,’ Dead at 89

Russell Johnson, who played the professor on “Gilligan’s Island,” died Thursday morning, his agent confirmed to TheWrap. He was 89.

Johnson died at his home in Washington state of natural causes, his agent, Michael Eisenstadt said. 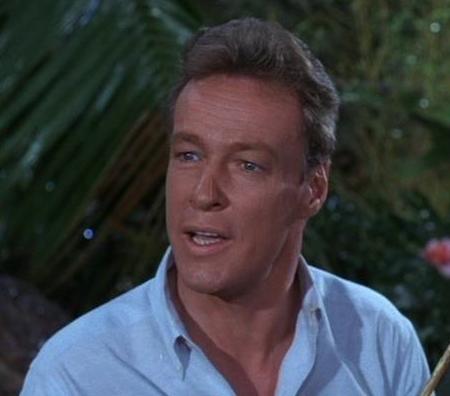 Thanks to Sarah Cole for bringing the sad news to our attention.

BONUS: A 1993 interview with Russell Johnson,  in the Toronto Sun, just before he went to the Ig Nobel ceremony