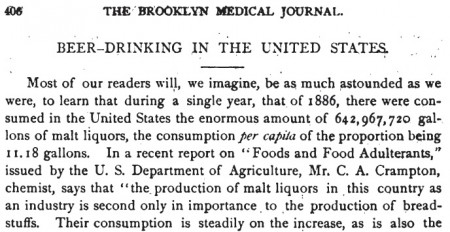 First we learn that Americans’ consumption of beer has risen tremendously since the Van Buren administration, though it still lags that of competitors.

[I]n 1840 the consumption of malt liquors in the United States was 23,310,843 gallons, or 1.36 gallons per capita, whereas, as has already been stated, nearly twenty-eight times as much was consumed in 1886. It is a matter of interest to know that great as this amount is, it is exceeded by several other nations. In the United Kingdom, 32.79 gallons were consumed in 1886 per capita, and in Germany, 23.78 gallons, while 11.18 gallons represents the per capita consumption in the United States.

The point of all this is that instead of drinking whisky and rum toddies and applejack and blackberry brandy, Americans are drinking beer. But we aren’t getting any drunker, since the extra .38 gallons of beer we’ve been consuming each year should contain about as much alcohol as the .05 gallons of hard liquor disappearing from our annual diet. No word on what kind of booze Crampton himself was drinking to make him think 1840 and 1886 were only twenty-six years apart.

Oddly enough, the Brooklyn Medical Journal is uninterested in discussing adulteration (the actual topic of the USDA report), except for some concern about adding salicylic acid to stop the yeast from continuing to ferment after beer is packaged for sale. Although salicylic acid is practically water compared with the sort of poisons unscrupulous businessmen would put into food, drink and medicine at the time.

How to help people envision the amount of beer a heroic drinker can consume? The Brooklyn Medical Journal starts with an anecdote, and sets off on a flight of fancy:

Mr. Thomann tells us that the average daily consumption of malt liquors by each brewery-hand [in New York, Brooklyn and Newark] is 25.73 glasses, or about ten pints. A considerable number of the men drink fifty glasses of beer a day, and two are reported as drinking on an average seventy glasses daily. One individual, fifty-six years of age, is specially referred to. This man has been uninterruptedly at work in breweries during thirty-two years, and has consumed throughout this period at the rate of fifty glasses per diem, amounting in all to 29,200 gallons, yet has never been sick, and was at the time the pamphlet was published healthy, vigorous and active.

We had the curiosity to estimate the size which a cistern would need to be in order to contain all the beer consumed by this man during these thirty-two years, and find it to be 7 feet in height and 26.6 feet in diameter. In such a cistern 201 men could be placed, each one occupying 400 square inches of standing room. If into a cistern of this size, thus filled with men, the 29,200 gallons of beer should be poured, there would be more than enough beer to fill it. In fact this amount of beer would drown 275 men, of an average weight of 156 pounds, and, owing to displacement, would, with this number of men, fill a cistern 26.8 feet deep, and 31 feet in diameter. A friend, who has seen these figures, suggests that if the 275 men were of equal capacity with the brewery workman referred to by Mr. Thomann, they would never drown, but would drink the cistern dry.

Er… an evocative image indeed. But maybe it would be better to imagine a giant quantity of beer inside a giant brewery vat or cask, instead of a cistern.