A century ago, the word “skiagraph” was sometimes used in place of “roentgenograph”, what we now call a radiograph or x-ray image. The idea was that a “photograph” represented light reflected off the surface of the thing being photographed, while a “skiagraph”, from the Greek for “shadow”, represented a silhouette. 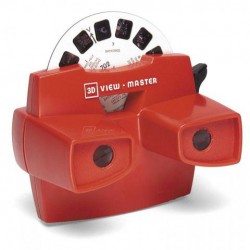 In a 1904 article(*), Dr. Mihran Kassabian of the Philadelphia General Hospital showed the world’s doctors how to add perspective to their radiographs, in an article about “stereoscopic skiagraphy”. Two x-rays taken from the right angles would look 3-dimensional, similar to the stereoscopic photographs you look at in a View-Master.

The Purpose of Stereoscopy.– The ordinary photographs and images look flat, as if seen by one eye, the reflection of one plane; while stereoscopic pictures, which are made by two lenses, each being two and a half to two and three quarters inches from each other (corresponding to the distance between the two pupils of the eyes) will be impressed on the retina as one picture, thus giving a perspective view.

The illusion of depth might improve x-ray imaging, though not enough to make stereoscopic skiagraphy popular. But by photographing his own equipment and a volunteer, Kassabian produced an endearing pair of images. 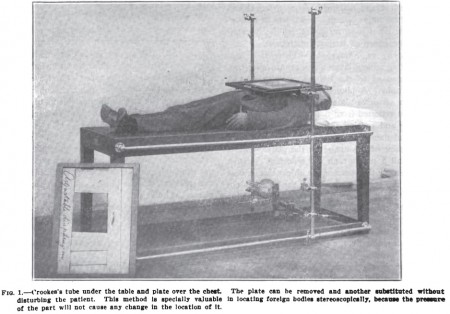 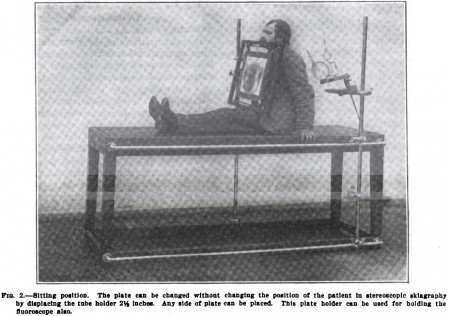