British tea preparation now includes preparation for possible visits to other planets. This study presents some of the relevant calculations:

“Tea Time in the Solar System,” Hannah Natasha Lerman, Benedict Irwin, and Peter Hicks, Physics Special Topics, vol. 12, no. 1, 2013. (Thanks to investigator Nigel Rawson for bringing this to our attention.) The authors, at the University of Leicester, UK, report:

“This paper explores the varying boiling temperatures of water on different bodies in the Solar System required to make a cup of tea. We calculated this value for Venus, Earth, Mars, Titan, Triton and Callisto as these have atmospheres with measured atmospheric pressures at their surface. It was found that Callisto required the lowest temperature to boil water at K whilst Venus required the highest at K. The temperature calculated on Titan was relatively similar to that on Earth with a difference of K.”

Here’s a chart from the study: 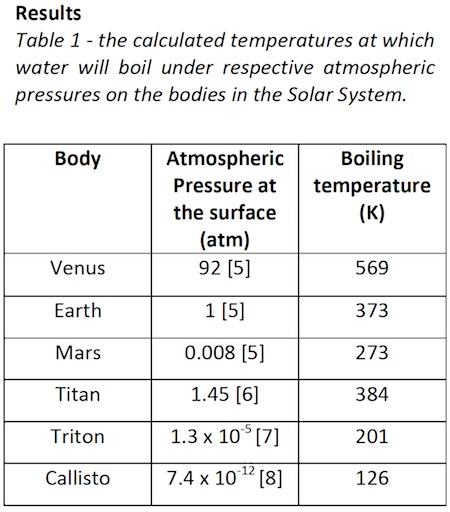 This physics work has implications for future alterations/extensions to the official British standard for how to make a cup of tea.