Lion manes and human beards. Human beards and lion manes. Say it as many times and as many ways as you like. Then read this essay, if you have interest in both of those things:

“Of Lion Manes and Human Beards: Some Unusual Effects of the Interaction between Aggression and Sociality,” D. Caroline Blanchard, Frontiers in Behavioral Neuroscience, 2009; 3: 45. The author, at the University of Hawaii at Manoa, writes:

“The function of manes in lions has been a topic of scientific interest since Darwin (1871) suggested that it provides protection in intraspecific fights. Recent experimental studies on wild lions have emphasized the role of female selection, but analyses of specific attack behaviors and targets, and the social consequences of manelessness for lions living in very hot climates suggest that male manes may indeed mitigate the outcomes of intraspecific male attack and thus serve a permissive function for multi-male + female groups, facilitating protection of prides against take-overs and infanticide by nomadic males. Humans also have unusual structural protections for the head, face and neck, areas that are especially accessible during intraspecies attack, and highly vulnerable to damage. One of these, the beard, consists of coarse hairs that grow indefinitely, but only for males, and only during and following puberty; suggesting that it, like the lion’s mane, may serve as protection in intraspecies male fights.”

Here is detail from the study, intended to show the vulnerability to injury of the area covered by a beard or mane: 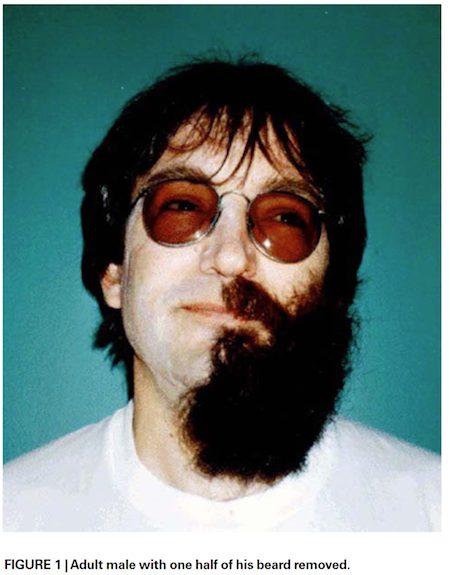