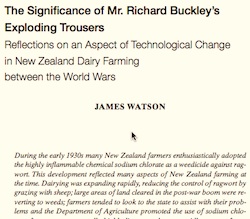 Behold three eras in the international saga of trouser flammability.

THEN: The 2005 Ig Nobel Prize for agricultural history was awarded to James Watson of Massey University, New Zealand, for his study, concerning the period between World War I and World War II, called “The Significance of Mr. Richard Buckley’s Exploding Trousers.”

LATER: This month, in 2013, the Danger Room blog reports that “U.S. Navy Invests in Coveralls That Won’t Burst Into Flames“. The article says: “The U.S. Navy has decided it’s finally time to get sailors new shipboard coveralls that won’t burst into flames and melt with a touch of a single match.”

Danger Room presents details, spiced with trouser-flammability-test videos. One video is from the suboptimal year 1996:

NOW: The other video is from the presumably glorious now:

BONUS: An advice columnist answers the question “Where can I find asbestos trousers for my boyfriend?”