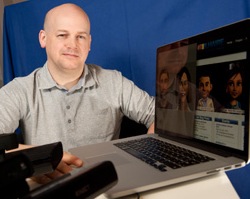 “The ILHAIRE project seeks to scientifically analyse laughter in sufficient detail to allow the modelling of human laughter and subsequent generation and synthesis of laughter in avatars suitable for human machine interaction. As part of the process an incremental database is required providing different types of data to aid in modelling and synthesis. Here we present an initial part of that database in which laughs were extracted from a number of pre-existing databases. Emphasis has been placed on extraction of laughs that are social and conversational in style as there are already existing databases that include instances of hilarious laughter.”

The ILHAIRE database is accessible to those who agree to certain conditions.

The encompassing ILHAIR Project web site includes a list of public deliverables, some demos (including the Body Laughter Index), and more.