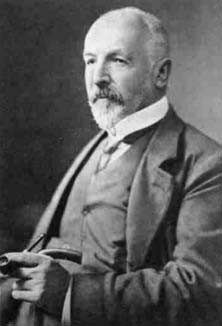 In an essay called “The Root of Infinity: It’s Surreal!“, the ThatsMath blog writes about a dark side to the power of numbers. The Cantor mentioned here is George Cantor [pictured here], who pretty much created large subsets of certain branches of mathematics :

… But the extended system was hugely controversial, and for good reasons. For example, Cantor found that

. His system was not commutative under addition. In fact,

from each side, but this would yield the nonsensical result

. The controversy was a factor in Cantor’s mental breakdown and ultimate suicide.

(Thanks to investigators @replicakill and @mathematicus for a corrective tweak to this.)