Another case of tea driving scientific effort and discovery:

“The aeroacoustics of a steam kettle,”  R.H. Henrywood and A. Agarwal, Physics of Fluids, vol. 25, 2013, 107101. (Thanks to investigator Richard Baguley for bringing this to our attention.) The authors, at the University of Cambridge, UK, report:

“The whistle in a steam kettle provides a near-perfect example of a hole tone system, in which two orifice plates are held a short distance apart in a cylindrical duct. This setup leads to distinct audible tones for a large range of flow rates. The main objective of the current paper is to understand the physical mechanism behind the generation of hole tones (whistling of steam kettles). A variety of experiments were undertaken, primarily focusing on how the acoustics of the hole tone system varied depending on the flow rate, whistle geometry, and upstream duct length. These were supplemented by flow visualisation experiments using water. The results show that the whistle’s behaviour is divided into two regions of operation. The first, occurring at Reynolds numbers (based on orifice diameter and jet velocity) below Reδ ≈ 2000, exhibits a near-constant frequency behaviour. A mathematical model based on a Helmholtz resonator has been developed for this part of the mechanism. The second, for Reynolds numbers greater than Reδ ≈ 2000, the whistle exhibits a constant Strouhal number behaviour.” 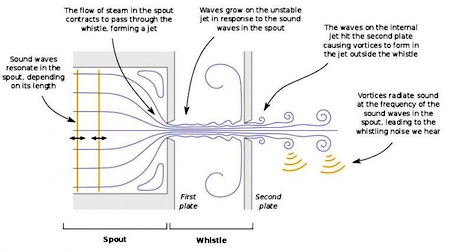 The two investigators are also known for investigating the physics of high-speed hand-dryers.

BONUS: The university issued a press release to celebrate the achievement. The press release says: “Researchers have finally worked out where the noise that makes kettles whistle actually comes from – a problem which has puzzled scientists for more than 100 years”. It then quotes R.H. Henrywood:

“Once we know where the whistle is coming from, and what’s making it happen, we can potentially get rid of it”.

BONUS: Video of an occasion on which Mr. Henrywood expertly sang the song “Gown of Green”:

BONUS: Jeremy Zander’s 2006 film dramatization of the late-night use of a steam kettle: