As far back as 1882, the publishers of ‘The Sydney Slang Dictionary’ (which listed such phrases) insisted that it was “By far the most Curious Work ever Published.” 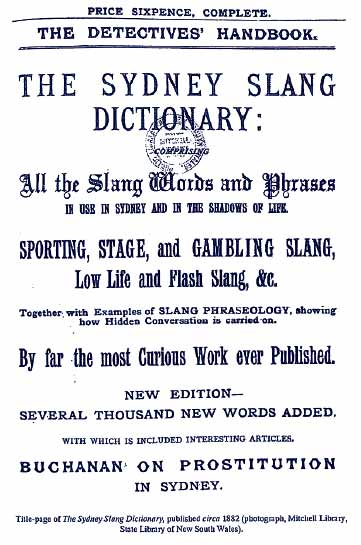 The question of whether it actually was or not, and/or whether even curiouser publications might have appeared since then, remains highly debatable. Either way, an article in the April 2010 edition of OZWords (a publication of the Australian National Dictionary Centre) displayed considerable underwhelmment with the content of the dictionary. Author Bruce Moore points out that of the 558 slang entries, only about 50 are truly Australian. Like, for example ‘On the Wallaby’ (meaning wandering and exploring). Whereas another entry,‘Nugget’ is in fact an old English word meaning ‘a lump of dirt’.

“This dictionary is therefore of very little value in the history of Australian lexicography. It appears to be an attempt to cash in on a popular and salacious interest in criminal slang. There is little that is distinctively Australian. This is a fact that should be clearly on the public and scholarly record.”

NOTE: As far as is known, only two copies of the dictionary are still in existence – both available to view at the Mitchell Library in Sydney.