A grieving family is upset after being ordered to remove personalised inscriptions from their loved one’s headstone comprising a Sudoku puzzle and mathematical equation.

Widow Angela Robinson of Barton Road, Farndon, is prepared to fight Farndon Parish Council all the way over its request that engravings be erased from the gravestone of her late husband Allan, who died in May last year aged 66.

She was particularly upset because the letter wrongly referred to her husband as ‘Mr Allen’ and said the decision was to ensure the standards of the burial ground at St Chad’s Church were “kept high for the benefit of all”.

Grandmother Mrs Robinson, 67, said the inscriptions were appropriate to her late husband, a retired mathematician, who had worked at Shell’s Thornton research centre.

She said: “It’s completely unnecessary. We are talking about a two inch square Sudoku puzzle and a one line mathematical equation because my husband was a mathematician and did a lot of Sudoku puzzles. He was a bit of a fanatic but this is personal to him….

The newspaper’s report includes this photo by Ian Cooper. Note that the gravestone to the right also has an image of some sort: 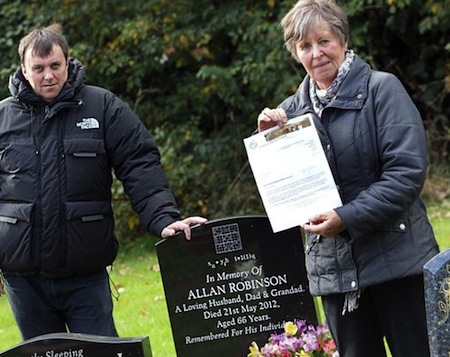 The Farndon Parish Council’s official notes about the incident are as follows:

MINUTES OF THE MEETING OF FARNDON PARISH COUNCIL HELD ON TUESDAY 3rd SEPTEMBER 2013 AT 7.30PM, IN THE MEMORIAL HALL, FARNDON.

In attendance: Suzi Pollard (Clerk), 5 members of the public.

The Clerk reported that a headstone in the burial ground contains inappropriate images; a discussion followed regarding the headstone guidelines, the process for applications and their approval.

It was generally felt that there was little merit in producing guidelines if they were not going to be adhered to.

Resolved: that the Clerk will write to the grave owner to request that she arranges for the inscription to be removed.

BONUS (possibly not unrelated):  The grave of Erwin Schrödinger, in Alpbach, Austria, is adorned with the Schrödinger equation.