Andre Geim, interviewed in YourIs, reveals two surprises, one speculating about materials he intends to study, the other about the existence of a predecessor to the celebrated levitating frog:

Andre Geim: graphene is only the beginning 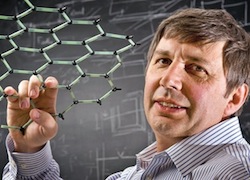 Geim is already looking in a more distant future. He thinks that probably, much more materials exist, that in structures with only one layer of atoms have surprising properties. “I don’t believe this is only the case for carbon varieties, but also for other elements of the periodic system and even for complex molecules. I suggest we should look again at mica.” ..

Geim underlines the importance of thinking ‘out of the box’ and ‘trial and error’ experiments. This approach is not only a reference to his mechanical graphene peeling, but also to his Ig Nobel work. The Ig Nobel Prizes are given for unusual or trivial scientific research achievements making people laugh, before they make them think. Geim won this prize together with Mike Berry, for the levitation of a little frog in a strong magnetic field. “First we used a hamster. After we saw the hamster didn’t like it, we took a frog.” Whether the frog liked the experiment, Geim does not know. The hamster, dubbed H.A.M.S. ter Tisha, was rewarded with a co-authorship of the research paper. The frog still remains anonymous.