Ever wonder what it’s like to be at the Ig Informal Lectures? Anna H, a member of the MIT class of 2014, went, and wrote about it, and posted some photos:

…This year, the Ig Nobel Prize official ceremony was held here in Cambridge – and, on Saturday September 14, all of the award recipients gave five-minute lectures (followed by a Q&A session) at MIT, in 26-100 (I sit through biology lecture in 26-100, three times a week!) It was impossible to pass up, so I went along, and brought my little sister. She was excited to be there! 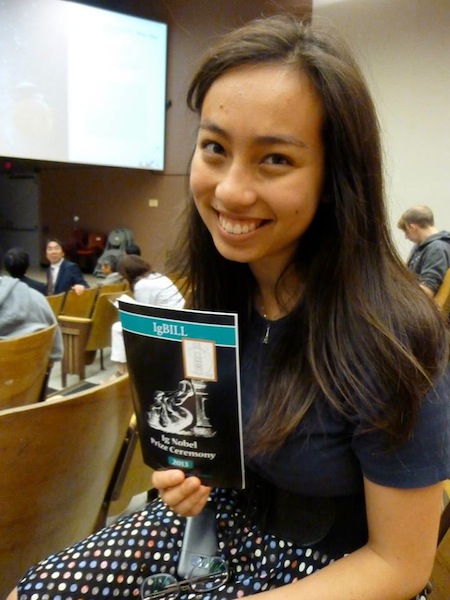 In the opening moments, Marc Abrahams (the man behind the whole Ig Nobel thing) asked for a volunteer who had a watch.

I had a watch. My hand shot up first. (In my boyfriend’s words: “Classic Anna.”) Marc Abrahams’ eyes settled on me, and I got to take a seat on stage. Next, he asked for people who could make loud noises: one guy made a clicking sound with his tongue, and another woman pulled out her ukelele (unclear why she had it with her…this will remain one of life’s mysteries.) We made a good team: 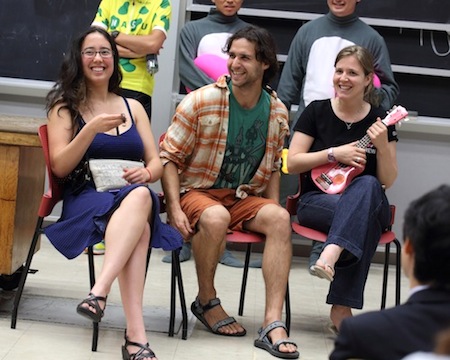 (photo credit to “john carr aka vox sciurorum” on Flickr; the ukelele player e-mailed this picture to me)

I introduced myself to the other two, and found out that the man lives in Italy (I think it was Italy?) and the woman lives in the Netherlands: both are in Boston, traveling.

Our mission: to let the speakers know every time a minute passed, and to really let them know once their five minutes were up. Every minute, I cued the other two, who responded by making their noises…[read the entire essay, on the MIT Admissions blog]