The Catholic Church recently gave itself a new pope. On the question of priests engaging in sexual reproduction, history is repeating itself. The last time around, we wrote (in 2005), in The Guardian: 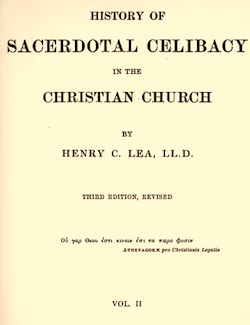 Whenever there is a new pope, the air fills with questions about priestly celibacy. The more formal term for this practice is “sacerdotal celibacy”. The most popular piece of literature on the topic, Henry Charles Lea’s voluminous History of Sacerdotal Celibacy was published in 1867 and has enjoyed many, many reprints. The book is 600 pages of juicy history and gossip, collected and described by a man who truly loved thinking about sacerdotal celibacy.…

The Vatican’s new secretary of state has said that priestly celibacy is not church dogma and therefore open to discussion, marking a significant change in approach towards one of the thorniest issues facing the Roman Catholic Church….

Video of the interview (in Spanish) is online courtesy of the Venezuelan newspaper El Universal.