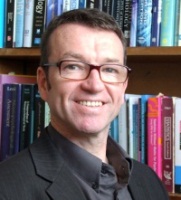 Richard Stephens has published a life and death account of  research about swearing:

In 2010, Professor Stephens and two of his students were awarded the Ig Nobel Peace Prize. The citation reads: