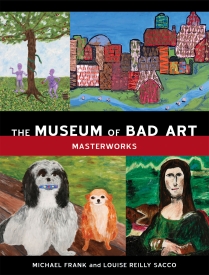 A new study may be of special interest to anyone who visits The Museum of Bad Art.

“Mere Exposure to Bad Art,” Aaron Meskin, Mark Phelan, Margaret Moore, and Matthew Kieran, British Journal of Aesthetic, vol. 53, no. 2 (2013): 139-164. The authors, at the University of Leeds, Lawrence University, and the University of Tennessee, explain:

“This paper addresses the interaction between mere exposure and the quality of the artworks to which we are exposed. It focuses on an experiment we conducted to test whether mere exposure increases or decreases liking for bad visual artworks. The results indicate that mere exposure to bad art makes people like it less.”

Kelsey Campbell-Dolleghan, in Gizmodo, essays upon the study, with the headline “How Thomas Kinkade Helped Prove That Art Can Be Scientifically Bad“.

(Thanks to investigator Charles Vincent for bringing this to our attention.)