Reports pour in about the closing of a museum that had little in fact to commend it but much in fiction. The Global Times says (and supplies this photo):

A museum in a village in Hebei Province has been shut down as most of its collections were reported to be fake, provincial cultural heritage authorities confirmed Monday.

The Jibaozhai Museum in Erpu village, Jizhou, has had its license revoked by Jizhou civil affairs bureau, and its mangers are under investigation, an official from Hebei Provincial Cultural Heritage Bureau, surnamed Li, told the Global Times…. 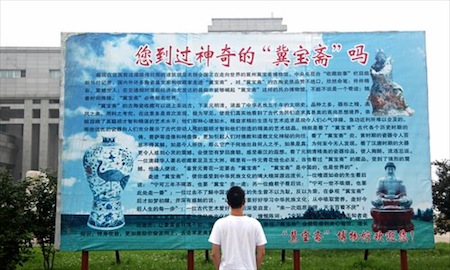 A Chinese museum has been forced to close after claims that its 40,000-strong collection of supposedly ancient relics was almost entirely composed of fakes.

The 60 million yuan (£6.4 million) Jibaozhai Museum, located in Jizhou, a city in the northern province of Hebei, opened in 2010 with its 12 exhibition halls packed with apparently unique cultural gems.

But the museum’s collection, while extensive, appears ultimately to have been flawed. On Monday, the museum’s ticket offices were shut amid claims that many of the exhibits were in fact knock-offs which had been bought for between 100 yuan (£10.70) and 2,000 yuan (£215).

The museum’s public humiliation began earlier this month when Ma Boyong, a Chinese writer, noticed a series of inexplicable discrepancies during a visit and posted his findings online….

(Thanks to investigator G. Jules for bringing this to our attention.)