Someone at Alternet is confused about a brassiere and a prize. Really, at least two people there are confused: the person who wrote the report headlined “Nobel Prize Winning, Gas-Mask-Convertible Bra Provides Defense Against Chemical Warfare“, and the editor or editors who handled the article during its gestation and journey on to the Internet. [NOTE, about an hour after we posted our appreciation of their article, Alternet apparently removed their article. But here’s a screen capture of what was there:] 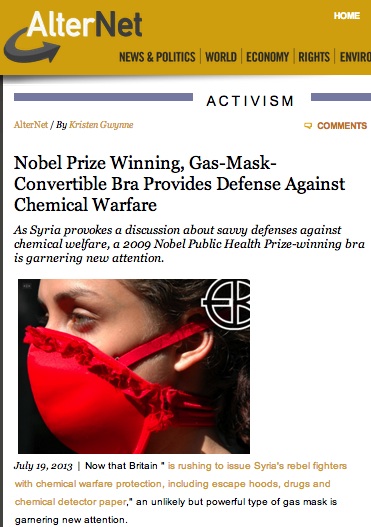 Dr. Elena Bodnar and her colleagues, inventors of the emergency bra,  were awarded a Ig Nobel Prize — not a Nobel Prize! — in the category of public health, in 2009. The Ig Nobel Prize citation reads: “Elena N. Bodnar, Raphael C. Lee, and Sandra Marijan of Chicago, Illinois, USA, for inventing a brassiere that, in an emergency, can be quickly converted into a pair of protective face masks, one for the brassiere wearer and one to be given to some needy bystander.” [REFERENCE: U.S. patent # 7255627, granted August 14, 2007 for a “Garment Device Convertible to One or More Facemasks.”]

This video shows Dr. Bodnar accepting the prize, and demonstrating the device with assistance from Nobel Laureates Wolfgang Ketterle, Orhan Pamuk, and Paul Krugman, at the 2009 Ig Nobel Prize ceremony:

Dr. Bodnar formed a company that now manufactures the emergency bra, and offers it for sale worldwide.

(Thanks to investigator Jess Zimmerman for alerting us to the Alternet article, and to Will Naughton for suggesting that that article “puts the ‘alter’ in ‘Alternet'”.)