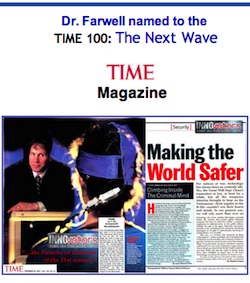 That report appears on the web site of Dr. Lawrence Farwell. The complete paragraph there says:

Government Works, Inc. is a company based in Southborough, Massachusetts, USA. The company’s web site explains: “the science behind Brain Fingerprinting technology has been reported on and touted in major print and broadcast media”. The web site explains that the technology has been the subject of numerous articles in scientific journals. It lists those papers, all of which were written or co-written by Dr. Farwell.

Dr. Farwell’s own web site has lots to say about Dr. Farwell [pictured here, in an image that originates on his web site], including this:

A report dated Saturday, June 8, 2013, in The Sunday Herald Sun newspaper, in Australia, speaks of the relative value of this technology:

Brain fingerprinting, which measures a suspect’s responses to triggers related to the crime, has been used in America for over a decade…. Detective Sen-Sgt Ron Iddles of the [Victoria, Australia, Police] Homicide Squad said he believed brain fingerprinting would have value as an investigative tool…. He said it was regarded as more reliable than lie-detector testing

(HT Mo Costandi for news of the Australian news)

BONUS: “Officials of Government Works’ Brain Fingerprinting technology will be visiting Nigeria” and “With our recent agreement with Government Works Inc. (GWI) in United States, Skyhigh Ventures Limited now has the exclusive right to brain wave science in intelligence gathering in Nigeria.”

BONUS: “CSSPakistan is proud to being associated with Government Works, Inc.”

BONUS: “The Truth About Lie Detectors (aka Polygraph Tests)“