Brendan Koerner looks at the past and present of one nation’s chicken-sexing industry: 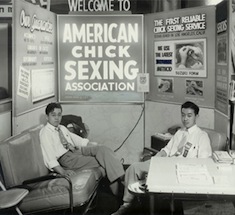 … This tale of economic triumph has a single hero: S. John Nitta, who founded the American Chick Sexing Association in 1938. During the war, when over 100,000 of his fellow Japanese-Americans were interned, Nitta continued to train and certify sexors; once the conflict ended, former internees turned to chick sexing as one of their few routes to economic advancement. Nitta was compelled to open up new training facilities, leaving behind his initial schools to be run by fellow Japanese-Americans. By the dawn of the Eisenhower Era, well over 90 percent of America’s chick sexers were of Japanese origin.

But Japanese-Americans lost this “nonlinear ethnic niche” quite quickly—partly because the next generation moved into more remunerative professions, but also because the advent of feather sexing opened up the enterprise to less skilled workers. But Nitta’s association is still with us, though it’s now down to two employees. I wonder if they still hand out these nifty certificates.