Imagine that you are employed as a professional field sniffer. That is, a person who has the job of attempting to identify and quantify odours, quite literally in the field. Think: agricultural, industrial and natural. But there is an inherent problem  – however keen your olfactory expertise, when you’re immersed in problematic stinky air, where can you get a breath of fresh air to compare it to? A method was suggested in 2003 via US patent 6595037

“Typically, in operation, after doing whatever is necessary to make sure that there are no lingering odors within cartridge or mask, the user with nose mask placed snugly over his or her nose moves or rotates disk so that the aperture containing the smallest orifice, and, correspondingly the thinnest insert, is in position opposite the inlet opening of barrel and sniffs to draw air into the nostrils. The operator normally takes a number of sniffs and exhales each one to make sure that a suitable sample of a mixture of odor-free and odorous air is being inhaled into the nostrils.“ 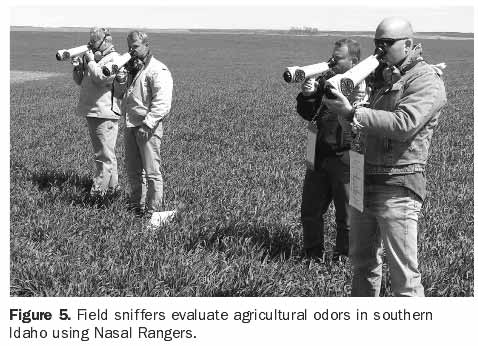 The patent was shortly to be capitalised-on with the production of the Nasal Ranger ®. Of course the accuracy of the final results still depends very much on the olfactory skills of the sniffer, but the Nasal Ranger ®, say the manufacturers :

Photo showing Nasal Rangers ® in action is courtesy of the University of Idaho.