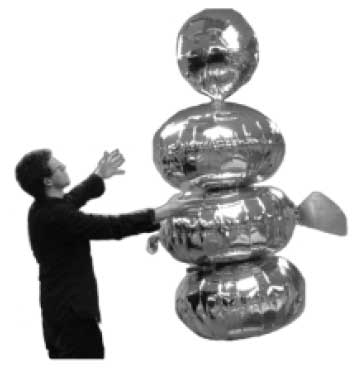 ‘Humanoid’ robots go back a long way,  and nowadays there are numerous flying robots in the skies, but there are very few which combine the two, and that could be meaningfully categorised as Flying Humanoid Robots (FHRs). But a team of experimenters from Advanced Telecommunications Research Institute International Kyoto, and the Department of Systems Innovation, Osaka University, Japan, have recently built just such a device – called Angel [pictured at left]

Angel was filled with helium, and could (in theory) fly all around its human partner. But the team had predictions regarding its positioning in 3-D space : for example –

“…people will not want a robot to come too close to their heads, as the head is the center for sensing and of great importance. People will also not want a robot above their heads, regardless of how far away it is, as the robot could fall or drop something; the humanoid form may furthermore convey a rude impression if the robot’s feet seem dirty or poised to kick the person.”

Thus the designers incorporated a software-based ‘repulsive field’ to keep it within acceptable ‘proxemic’ zones.

“Results suggested that a FHR should fly near head height when communicating, but not too close to or above a person’s head or near a person’s feet; that rotations can show agreement and playfulness; that a standing posture is associated with neutral impressions; and that velocity and acceleration can show arousal.”

The paper can be read here in full : Designing a Flying Humanoid Robot (FHR): Effects of Flight on Interactive Communication

AN ASIDE : Another, this time purely artistic, representation of a human (August Strindberg) interacting with a lighter-than-air companion. (Helium)