Gono was  awarded his Ig Nobel Prize in the year 2009, in the field of mathematics, for giving people a simple, everyday way to cope with a wide range of numbers — from very small to very big — by having his bank print bank notes with denominations ranging from one cent ($.01) to one hundred trillion dollars ($100,000,000,000,000).

RESERVE Bank governor Gideon Gono yesterday warned the public against taking Spirit Embassy leader Uebert Angel Mudzanire’s “so-called miracle money” and urged the “man of God” to stop his acts lest he lands the country in trouble with international law….

[Gono said:] “You cannot just wake up in the morning and say that my account has this much money which I cannot tell where it came from and hope that you can have access to it or escape interrogation by authorities. It’s not possible.” … where were these miracle men and women of God during the period 1998 to 2008 when some of us were trying every trick in and outside the book to keep this country afloat?” 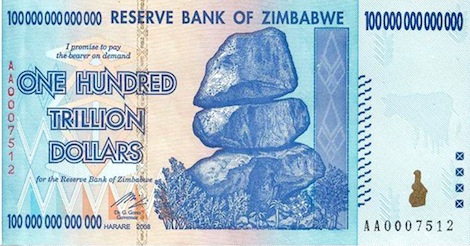