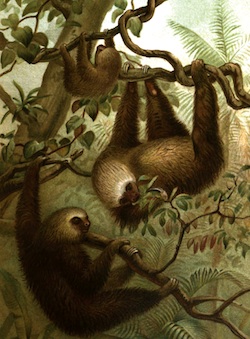 The name of the sloth is synonymous with a certain style of sin. But scientists pursue them for other reasons, too. The animals move – something they do on occasion – in what can seem mysterious ways. They hang upside down from tree limbs, and sometimes amble that way there. On the ground, ambling right-side-up is their preferred way to get from here to slightly over there. They often snooze.

A study called Three-Dimensional Kinematic Analysis of the Pectoral Girdle During Upside-Down Locomotion of Two-Toed Sloths appeared two years ago in the journal Frontiers in Zoology. John Nyakatura and Martin Fischer of Friedrich-Schiller-Universität in Jena, Germany, analysed the “suspensory quadrupedal locomotion” of two sloths. They concluded that an earlier biologist had exaggerated, but only slightly, in proclaiming that “of all mammals, the sloths have probably the strangest mode of progression”.

Others hesitated less to say more….