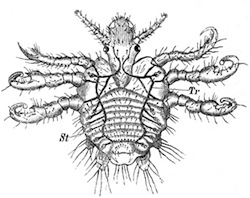 Why the sudden interest in the declining number of pubic lice, seen by doctors? The Bloomberg news piece ‘Brazilian Bikini Waxes Make Crab Lice Endangered Species’ is not much different from the reports that made the papers in 2007, when I started my quest to save ‘the last of the pubic lice’ for the collection of the Natural History Museum Rotterdam, after Nicola Armstrong and Janet Wilson’s paper Did the ‘Brazilian’ kill the pubic louse? inspired me to use these parasitic insect as a tool to talk and write about biodiversity and habitat loss.

There is no new research reported. So what is new? This?

In Australia, Sydney’s main sexual health clinic hasn’t seen a woman with pubic lice since 2008 and male cases have fallen 80 percent from about 100 a decade ago.

The global market for depilatories was worth $4.69 billion last year, according to London-based Euromonitor International Ltd., which estimates sales increased at a 7.6 percent average annual clip the past decade. Cincinnati-based P&G, Slough, England based Reckitt Benckiser and Energizer Holdings Inc. (ENR), based in St. Louis, dominate the market, which Euromonitor predicts will reach $5.6 billion by 2016.

Naming these firms and figures might be the only reason why Bloomberg brought this ‘news’.

There is however promising news from Janet Wilson:

She and colleagues are analyzing patient records to see if it’s lowered rates of pubic lice further, and will present their latest findings at a medical meeting in May.

This, of course has our full interest.