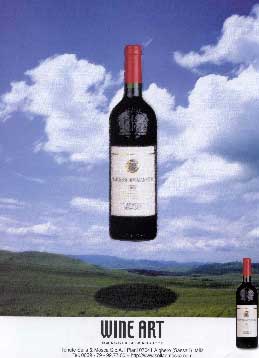 First, a quick look at (some of) the scientific works which have investigated how fMRI might help in the understanding of the human brain’s responses to Surrealism.

Intriguing though they may be, the studies don’t have much to say about how surrealism might interface with the commercial money-making real-world – say, via advertising. But just such an investigation has been performed by Dr. Mohamed M. Mostafa, associate professor of marketing at the Gulf University for Science and Technology (GUST) (Kuwait).In his paper entitled The persistence of memory: an fMRI investigation of the brain processing of Surrealistic imagery in advertising (Journal of Marketing Communications, 2012, DOI: 10.1080 /13527266.2011. 653688) the professor alerts us to the perils of  ‘Blobology’

“Without testing theoretically driven marketing concepts, there is a chance of falling ‘unwittingly prey to exactly the kind of blobological approach that has received criticism in social and general neuroscientific circles’ (Lee and Chamberlain 2007, 23).”

The experiments, which showed surrealistic ads (like the one above) to observers in an fMRI machine, nevertheless bore fruit :

• The Wine Art image used in the study (shown above) is provided courtesy of the Computing in the Humanities and Social Sciences department at the University of Toronto.

• The ‘Wine Art’ ad appears to show a bottle of Marchese Di Villamarina 1993  (Sella & Mosca) rather than a bottle of Grand Marnier, as the paper describes.

“ … in an advertisement labeled ‘Wine Art’, we see a large bottle of Grand Marnier floating above the floor with no visible support in a direct parody of Magritte’s 1961 painting ‘Le Château des Pyrénées’ (Castle in the Pyrenees).”

• Grand Marnier is a brandy.