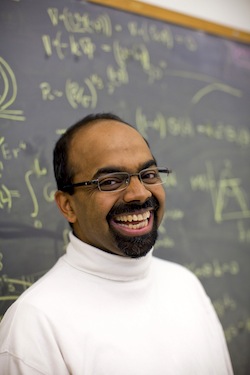 The BBC celebrates a newly published study by Mahadevan [pictured here], the man who (with colleague Enrique Cerda Villablanca) was awarded the 2007 Ig Nobel Prize in physics for studying how sheets get wrinkled. The new study is:

Philip Ball, reports for the BBC’s on a topical application of the new study:

No one tries to cut up a turkey by simply pressing down hard with the blade – that’s likely merely to squash the bird. As with cutting bread, you’ll instead use a sawing motion, sliding the knife through the soft meat. But why is slicing more effective than chopping?

That’s the question investigated by Lakshminarayanan Madadevan, an applied physicist at Harvard University in Cambridge, Massachusetts, and his colleagues…. [In] an age of huge, costly international collaborations, it is heartening to know that good science can still be done with a piece of wire and a block of jelly. That is essentially what Mahedevan and colleagues have used to understand the physics of slicing and cutting. Their soft solid is a polysaccharide gelling agent extracted from algae, known as agar and widely used as a food ingredient in Asia. The researchers cut a block of this stuff using either metal wire or thin fishing tackle, stretched tautly like a cheese wire. They investigated the forces that develop in the gel when the wire is either just pushed down through the block or when it is also pulled across the surface in a slicing action.

The two cases give different results….

(Thanks to Janusz Lukasiak for bringing this to our attention.)