We are now publishing each issue of our magazine — the Annals of Improbable Research — as an e-book, as well as on paper. We think our little invention is a big deal for anyone who publishes magazines — and for anyone who reads them. 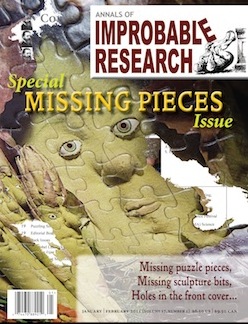 We invite you to download a free e-book issue of the Annals of Improbable Research! If you like it, there are lots more back issues.

Until now, no —not any!— magazines have been available as standard e-books. That’s a big problem. We invented a simple way to solve that problem. Below, I  explain (A) the problem; and (B) how we solved it.

The Problem: Magazines are not available as e-books

For most nicely formatted publications — hello, magazines! — e-book versions have until now been impractical-to-impossible. Yes, some magazines are available in digital form — but, as far as we are aware:

What We Invented: How to make a magazine into a standard e-book (for tiny & big screens)

We wanted to make our magazine issues into standard e-books comfortable to read on a tiny screen (such as a mobile phone), as well as on a big screen. If you have ever tried to read a nicely formatted document (a PDF, for example) on a mobile phone, you know that it’s excruciatingly awkward to navigate your way through a page.

That’s why we invented a special format. Each of our e-books contains TWO copies of the magazine, each with the same content. The first copy is formatted in a simple, small-screen-friendly way. The second copy shows the same issue of the magazine, but formatted in full glory, exactly as it appears in the print edition.

This two-in-one format is just a wee, little innovation. But it solves the problem of how to make a magazine (or any publication that has a complex layout) that people can get and read as a standard e-book.

Using this format, we can take an issue of our magazine, and produce an e-book version that’s available on Amazon and on Barnes & Noble and elsewhere. This e-book version is comfortable to read on any device that handles standard e-books — comfy on tiny screens and big screens.

Here at Improbable Research, Lauren Maurer did most of the hard, careful, often-frustrating work of turning the concept into the actual e-books. Geri Sullivan contributed a helping of her famous design expertise and wisdom.

Many people helped us, especially in learning about many of the undocumented quirks of the Kindle, the Nook, and other e-book readers, and finding many equally-bedeviling quirks of the various online e-bookstores. I’d like to mention a special few individuals who knowledgably, kindly, patiently helped in a big way: Ben Biggs, David Foulser at Google; Ros Reid at Harvard SEAS; and Sara Montgomery and Nick Sidwell at The Guardian.

There’s a tremendous amount of published, richly-formatted material — magazines and lots more — that until now has been un-offerable and unobtainable in a comfortable digital form. Please help us spread the word to other publishers that they, too, can make make their magazines (and whatnot) into e-books.