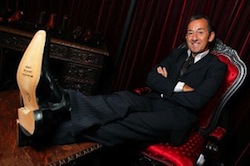 Prime minister Margaret Thatcher‘s masterful way of handling interruptions inspired one psychologist to study, intently, how she did it. As this scholar communicated his findings to the public, other scholars, with different views, interrupted him – and he them.

Geoffrey Beattie [pictured here] is now a professorial research fellow of the Sustainable Consumption Institute at the University of Manchester. Or rather, was — he reportedly was sacked after I wrote this column but just before it was published.

In 1982, while at the University of Sheffield, Beattie published two studies about Thatcher….