A celebrated “immortal” jellyfish dies a thousand deaths, so to speak, when Paul Raeburn gives it a good look in the Knight Science Journalism tracker. Raeburn writes:

Only a few weeks after Newsweek and Simon & Schuster gave us proof of heaven,  The New York Times now offers us immortality in the form of an article entitled “Can a Jellyfish Unlock the Secret of Immortality?” 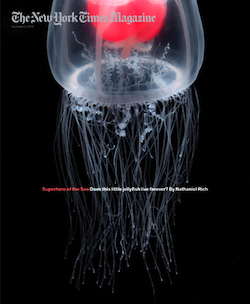 It is now online and will appear as the cover story in the Dec. 2 New York Times Magazine….

It’s a fascinating creature. But the problem with this story is that much of what is reported is highly improbable, even unbelievable. And the writing is discursive to a fault. We learn far more than we need to, for example, about the principal researcher’s avocation as a songwriter and karaoke singer.

The article’s biggest failing, however, is that the entire premise of the story is undermined in the middle of the piece and again in the last few grafs, with two revelations likely to leave readers flipping back to the beginning to figure out how they were so badly misled….

BONUS: Jonathan Eisen serves up a few notes on the matter.