Wormholes — what are they good for? This study suggests one possible answer:

“I show that printed wormholes in rare books and artwork are trace fossils of wood-boring species with unusually accurate locations and dates. Analyses of wormholes printed in western Europe since the fifteenth century document the detailed biogeographic history of two putative species of invasive wood-boring beetles. Their distributions now overlap broadly, as an outcome of twentieth century globalization. However, the wormhole record revealed, unexpectedly, that their original ranges were contiguous and formed a stable line across central Europe, apparently a result of competition. Extension of the wormhole record, globally, will probably reveal other species and evolutionary insights. These data also provide evidence for historians in determining the place of origin or movement of a woodblock, book, document or art print.” 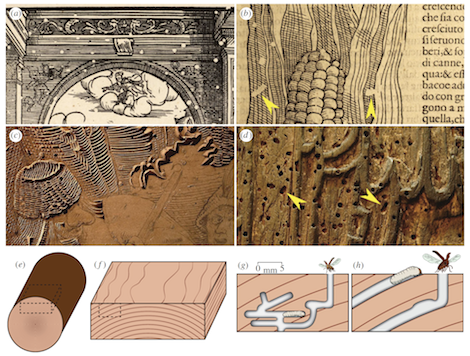 (Thanks to investigator Megan Juarez for bringing this to our attention.)

BONUS: A different kind of wormhole, and its relation to space and time