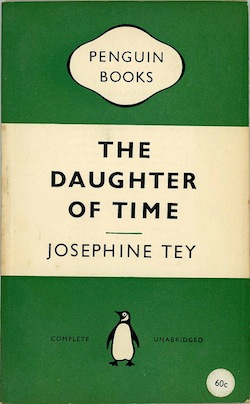 “It’s an odd thing but when you tell someone the true facts of a mythical tale they are indignant not with the teller but with you. They don’t want to have their ideas upset. It rouses some vague uneasiness in them, I think, and they resent it. So they reject it and refuse to think about it. If they were merely indifferent it would be natural and understandable. But it is much stronger than that, much more positive. They are annoyed.

―A thought expressed in Josephine Tey’s mystery novel The Daughter of Time. The novel’s name comes from the saying “truth is the daughter of time”.

BONUS (somewhat related): An appreciation of the science related to the title of another of Josephine Tey’s mystery novels, The Singing Sands.

BONUS: A short video in which the actor Vincent Price rambles on about Josephine Tey: