“There are lots of good reasons for making a hole in someone’s head, and in a neurosurgeon’s hands it is not a risky procedure, but for someone doing it themselves the risks are huge.” 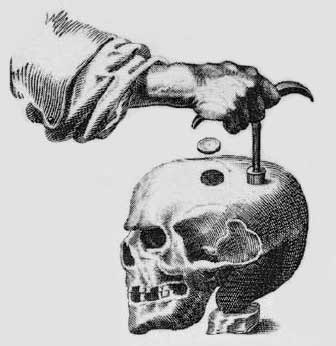 This advice, from the British Medical Journal (BMJ, 320(7235): 602.), is very probably as sound today as when it was published in March 2000. For those who want to read more about the history of cranial boring (self-drilled and otherwise) look no further than the definitive book by Charles G Gross, ‘A Hole in the Head : More Tales in the History of Neuroscience’, 367 pages, The MIT Press, 2009. Significant extracts of which may be found here.

The picture above is a detail from an illustration plate found in some editions of  :

THE SVRGIONS MATE,
OR,
A TREATISE DISCO-
uering faithfully and plainely the due
contents of the SVRGIONS Cheft : the ufes of the
Instruments, the vertues and operations of the
medicines, the cures of the moft frequent
difeases at SEA:
Namely,
Wounds, Apoftumes, Vlcers, Fiftulaes, Frac–
tures, Diflocations, with the true maner of Amputation,
the cure of the Scuruie, the Fluxes of the belly,
of the Collica and Illiaca Passio, Tenafmus,
and exitus Ani, the Callenture;
WITH A BRIEFE EXPLANATION
of Sal, Sulphur, and Mercury; with certaine
Characters, and tearmes of Arte.’
Penned in 1617 by surgeon, barber and cranial-drill inventor John Woodall  (c.1570 – 1643).