A 2005 study tried to use math techniques to analyze who was (and who will be) successful in building broadway shows:

The authors analyzed the small world network of the creative artists who made Broadway musicals from 1945 to 1989. Based on original arguments, new statistical methods, and tests of construct validity, they found that the varying “small world” properties of the systemic level network of these artists affected their creativity in terms of the ﬁnancial and artistic performance of the musicals they produced…..

DATA AND METHODS: Our data include the population of all 2,092 people who worked on 474 musicals of new material produced for Broadway from 1945 to 1989…. 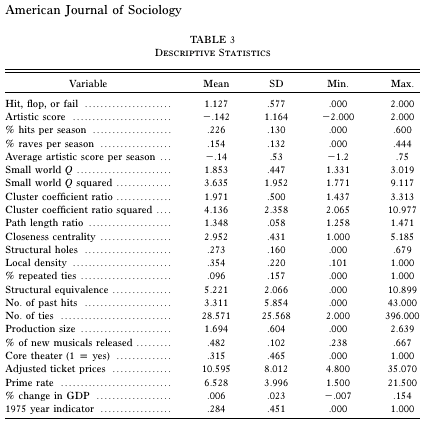 DISCUSSION: Consistent with [our] prediction, about 90% of the new shows were ﬂops from 1919 to 1930. By comparison, in the 1945–89 period, when Q was around the bliss point, about 75% of the shows were ﬂops. Thus, these data and tests, while only circumstantial, corroborated the U-shaped relationship for periods beyond the one studied.