Stochastic flights of propellers, seldom discussed until now, are openly described in this new study:

“Kilometer-sized moonlets in Saturn’s A ring create S-shaped wakes called ‘propellers’ in surrounding material. The Cassini spacecraft has tracked the motions of propellers for several years and finds that they deviate from Keplerian orbits having constant semimajor axes. The inferred orbital migration is known to switch sign. We show using a statistical test that the time series of orbital longitudes of the propeller Bl\’eriot is consistent with that of a time-integrated Gaussian random walk. That is, Bl\’eriot’s observed migration pattern is consistent with being stochastic. We further show, using a combination of analytic estimates and collisional N-body simulations, that stochastic migration of the right magnitude to explain the Cassini observations can be driven by encounters with ring particles 10-20 m in radius. That the local ring mass is concentrated in decameter-sized particles is supported on independent grounds by occultation analyses.” 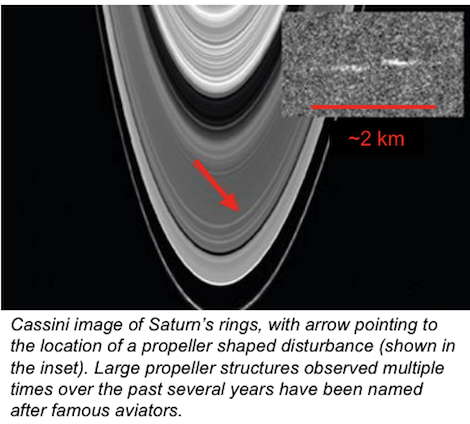