We hope that someone will ask Dan Meyer and Brian Witcombe, Ig Nobel medicine prize-winning co-authors of the study “Sword Swallowing and Its Side Effects“, for their take on this case report newly published in the New England Journal of Medicine:

“A 30-year-old woman with a history of bulimia presented to the emergency department after swallowing a knife. She inserted the knife into the posterior oropharynx to demonstrate to her companions that she no longer had a gag reflex. When she unexpectedly laughed, the knife migrated into her esophagus, causing chest discomfort and hematemesis. Anteroposterior chest and abdominal radiographs (Panels A and B) revealed a knife within the distal esophagus and proximal stomach,… Her husband later disclosed that 4 years earlier she had swallowed a knife that required surgical removal with exploratory laparotomy.” 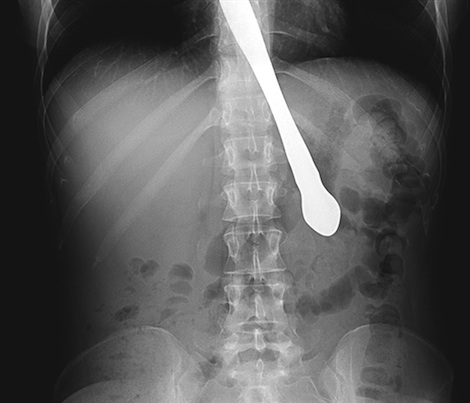 (Thanks to Maggie Fox, and to NBC News, for bringing this to our attention.)

BONUS: Video of Meyer and Witcombe’s Ig Nobel acceptance speech, at the 2007 ceremony:

BONUS: There was a young woman who swallowed a roach…