The photo reproduced here is from the Bournemouth Echo, accompanied by the headline “Newsagent’s anger as big stores ‘kill his trade’“. 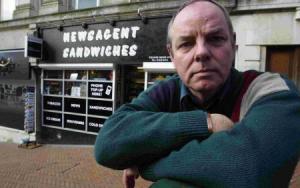 Many of the other photos in the blog show people who are not obviously angry, but who are described as being angry.