“The Riddle of a Riddle,” Ivan Gaskell, Contemporary Aesthetics, March 8, 2008. The author, at Harvard University, writes: 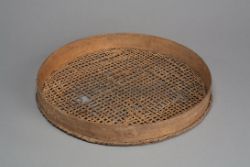 ABSTRACT: This paper examines the distinction made by Arthur C. Danto between artworks and what he terms “mere real things.” It presents an eighteenth-century tool for sifting grain (a riddle) as a case study in the contexts of first, the house of its first known owner, General Artemas Ward (1727-1800); second, an exhibitioin 2006-7 drawn from the contents of that house pointedly held in an art museum; and, third, the likely maker of the object, a member of Hassanimisco Band of Nipmuc Indians. It examines the equivocal position of objects such as this in Danto’s estimation, things that he considers to be “under contest,” and asks whether the distinction between artworks and mere real things has any pertinence when artifacts can be used or regarded so variously in the course of their existence, whether as tools, symbols, artworks, or living beings.

BONUS: “The Riddle of Riddles Unriddled” by John Stancliffe, 1784.