Low key, steady excitement comes through in this News.com report about the Australian project that was honored with the 2005 Ig Nobel Prize in physics:

IS this the world’s most boring live stream?

Well, yes. But that could all change anywhere between the next five seconds and the next 12 months.

It’s been 12 years and four months since the last time this glass jar at the University of Queensland saw any action – exactly the same amount of time it took something to happen before that. But what exactly will happen? As a famous scientist once said, we’re glad you asked. That blob of tar pitch stretching down from the cocktail glass shaped thing will fall on the eight other blobs settled below it. Excited much? Trust us, it gets better.

I can’t wait. Take me to the live feed of the pitch drop experiment immediately …

The photo below, taken in 2007, shows Professor John Mainstone, co-winner of the Ig Nobel Prize, Professor Mainstone as he awaited the ninth drop. 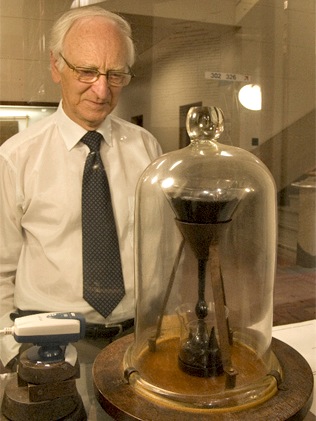 (Thanks to investigators Deb Geisler and Geri Sullivan for bringing the news report to our attention.)