Breaking: Oppenheimer to leave for UCLA 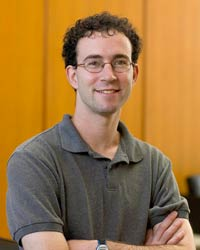 Oppenheimer received tenure at the age of 30 and has taught PSY 101: Introduction to Psychology, one of the largest classes in the school, since the fall of 2005…. Oppenheimer is popular among undergraduates, especially for his lecturing skills…. In addition to teaching, he has authored and co-authored over 40 academic papers related to psychology since 2003….

Oppenheimer also won the Ig Nobel Prize for Literature in 2006, which is awarded by past Nobel Prize winners for humorous or thought-provoking research. To win the prize, Oppenheimer demonstrated that people who use longer words actually appear less intelligent than those who don’t.

At UCLA, Oppenheimer will be jointly appointed to the department of psychology and the business school.